How Does a Car Breathalyzer Work?

You are here: Home / General Information / How Does a Car Breathalyzer Work?
July 15, 2016 by Editorial Staff 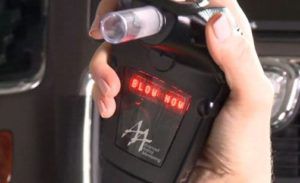 Special technology in a car breathalyzer detects the alcohol you’ve been consuming.

This fuel-cell technology was developed over the last 100 years, beginning with the 1930s Drunkometer and continuing into today’s police breathalyzers and ignition interlock or car breathalyzers. Essentially, the alcohol you consume is never actually digested, unlike cheese fries or a salad. The alcohol is absorbed through your mouth, stomach, or intestines into your blood system where it is naturally filtered out. The device detects and measures this ethyl alcohol (the kind in beer, wine, and liquor) as it leaves the system. An equation exists which matches the amount given off in the breath to the amount in the bloodstream. The car breathalyzer’s fuel-cell technology calculates the amount in the breath and delivers the corresponding blood alcohol number.

A .08 percent BAC as measured by a breathalyzer means you are legally drunk.

Here’s what the real power of a car breathalyzer is: not just keeping a person from driving under the influence when his or her BAC level exceeds a pre-set limit (usually around .02 percent BAC), but allowing a DUI offender the chance to get back on a road and lead a responsible life.

Considering that the alternatives to a car breathalyzer are a suspended license, with the resulting employment problems, and incarceration, the device is more of a compromise than anything. The device keeps an offender from repeating a crime and possibly with a worse outcome than before is a priority, and where truth becomes a lifesaver for us all.