The Right Way to Deal with Florida Wrong-way DUI Drivers

You are here: Home / General Information / The Right Way to Deal with Florida Wrong-way DUI Drivers
January 9, 2017 by Editorial Staff 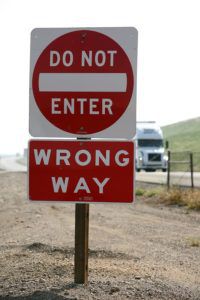 Florida has a fun way of keeping us out of the wrong-way DUI driver danger zone: we should just drive in the right lane. Somehow, it is our responsibility to ensure our own safety on our own side of the road by reducing our presence in lanes closest to oncoming traffic. There may be some victim blaming in this campaign that’s hard to swallow… but there are also way too many Florida DUI wrong way drivers, too.

Statistics show that over 20% of wrong-way fatal accidents in Florida are caused by DUI drivers.

The National Transportation Safety Board (NTSB) estimates the total number of wrong-way DUI incidents (fatal and non-fatal) at half to ¾ of the total reported. Sometimes even the most sober driver can get caught up in confusing road signs.  When impaired by alcohol, those same confusing signs, on-ramps or a general misunderstanding of driving can lead all sober drivers to stay as far to the right as possible, rather than become part of the wrong-way DUI problem.

Perhaps instead of warning sober drivers to remain extra cautious and amenable to allowing drunk drivers the “wrong of way,” we could focus on preventing all Florida DUI problems. Expanding ignition interlock access is one solution that takes the guesswork out of which lane to use, and it sends a clear message to everyone in the state.  Last year, Florida took steps to do just that, even if the legislation stalled. Since Florida has a reputation for drunk drivers, and the proof of the dangers of wrong-way DUI drivers, this year seems idea to pick right back up.

We can’t blame ourselves for drunk drivers. We can be sure we’re doing our own part to only drive if we’re sober, and ask our state lawmakers to toughen up the laws. There’s a wrong way to get the message out about DUI driving, and a right way to ensure we’re all much safer on the roads, no matter which of our lanes we’re driving in.

What Dry January Does for You
Next Post: You Blew It… for Life: Your 4th Illinois DUI is a Felony