What’s My BAC? Food and the Myth of Sobriety

You are here: Home / General Information / What’s My BAC? Food and the Myth of Sobriety
November 12, 2014 by Editorial Staff 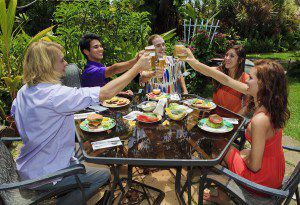 In the world of drinking, there are countless myths that people depend on to maintain an appearance or feeling of sobriety. Most of the time, it seems, the biggest concerns are whether a person can safely drive home after a few too many drinks, or at least pretend to be sober while driving.  Nobody wants to get caught drinking and driving, especially with high financial costs, ignition interlock devices and jail time possibilities, and that’s where “myths of sobriety” begin to be tested, usually with a bad outcome.

Drinking alcohol can quickly lead to problems with judgment, especially when you think about the actual process of metabolizing several drinks within an hour or so. A big sobriety myth is that drinking on a full stomach is better than drinking on an empty stomach or that food will somehow lower your blood alcohol concentration (BAC). While a somewhat complex process, alcohol absorption can change depending on even how much food you’re eating at the time you are drinking, but, food won’t help you sober up once you’re drunk.

Still, food can benefit you when drinking in a few ways:

If you are craving late-night drive-thru food after being at a bar, that’s more than likely your body asking for nutrients than a way to reduce the amount of alcohol you’ve consumed. The foods you eat after drinking can also supply you with a little energy boost, making you feel less intoxicated, even if your BAC is above the legal limit. However, if you have been drinking all night and expect food to keep you sober while driving, you could be putting your life and the lives of others in danger. It’s better to get that burger “to go,” and call a taxi to get you home safely.

You Have 14 Days to Install an Ignition Interlock Device in Wisconsin
Next Post: Changing the Way We Think about Car Breathalyzers