Can You Fail a Breathalyzer After Vaping Alcohol?

You are here: Home / General Information / Can You Fail a Breathalyzer After Vaping Alcohol?
April 26, 2017 by Editorial Staff 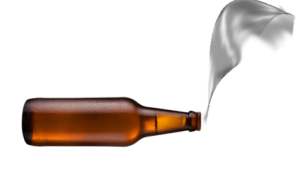 To get drunk, people are getting creative, and perhaps facing more dangers through innovation. But a new trend is forming – vaping alcohol.  Any sort of excessive drinking is dangerous, be it via beer bongs or vodka tampons. But technology is allowing many drinkers to take it even further, one could even say deeper, by vaping alcohol. Vaping alcohol is the logical next step for the fans of nicotine vaping. Only you can still get drunk. But, you can still fail a breathalyzer.

When alcohol vapor is inhaled, it goes straight from the lungs to the brain and bloodstream, getting the individual drunk very quickly. Because the alcohol bypasses the stomach and liver, it isn’t metabolized as a natural defense, and the alcohol doesn’t lose any of its potency. Drinkers feel the effects almost instantly, but the risks are also much higher. People who are vaping alcohol are at a much greater risk of addiction, alcohol poisoning, or driving impaired. When people drink too much alcohol, they tend to vomit. Getting sick is one of the ways that prevents an alcohol overdose, but when alcohol circumvents the stomach and liver, the body can’t expel it.

It is also difficult to know one’s limit when you are vaping alcohol. If a drinker vaporized 1 cup of liquid, the drinker does not know if they have inhaled a few sips or the whole cup, since the liquid remains in the orb.

Since a police breathalyzer or ignition interlock tests the air in your lungs for your blood alcohol concentration (BAC), you will have likely have a failed test after vaping alcohol.  A failed BAC test means you’ll face drunk driving charges and possibly end up with your very own ignition interlock. No matter your method for consuming alcohol, all roads can lead to a DUI. Be safe and no matter how you consume alcohol, never get behind the wheel or an ignition interlock may be the least of your problems.