It’s Close Enough to a DWI: Why Texas Won’t Let You Drink and Operate a Roller Coaster

You are here: Home / Laws / It’s Close Enough to a DWI: Why Texas Won’t Let You Drink and Operate a Roller Coaster
April 22, 2015 by Editorial Staff 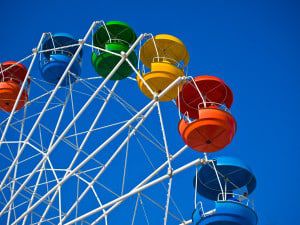 Texas has pretty clear DWI laws and consequences for anyone who drives while intoxicated. If you are convicted of drinking and driving in Texas, you are looking at a minimum jail requirement, steep fines and a possible car breathalyzer or ignition interlock requirement. But, driving isn’t the only thing a person does when they’ve had too much to drink. There are hundreds of other ways to hurt yourself when you’re intoxicated, not to mention others around you, like operating amusement rides, or building them at carnivals. That’s right, there are laws against that in Texas, and it is a good thing, too.

Essentially, as the person who is putting together a carnival-type roller coaster or other ride, you are responsible for the safety of those who will ride it. So, if you’ve been drinking, you’re putting together a vehicle for disaster. Simply running the roller coaster or other amusement park ride falls under the same statute, because when you push the “go” button, you’re the driver of the roller coaster or amusement ride… and we all know driving while intoxicated can be deadly. Although you’ll not face the same consequences as a DWI, both of these situations require you to remain sober. Lives depend on it.

You won’t have to install an ignition interlock for being drunk in public, but if you’re caught operating or assembling an amusement ride while intoxicated, you’re going to face some different troubles of your own. Anyone who is trusted to keep thrill-seekers safe should understand the need to remain sober on the job; it really isn’t much different than a DWI and the number of people you can hurt should be enough incentive to save the drinking until later.

Moving On: I’m Ready For My Ignition Interlock, West Virginia
Next Post: Tomato, Tomato: Is a DUI or DWI Worse