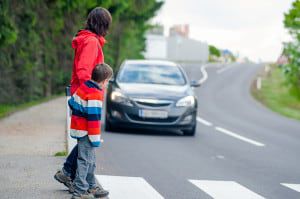 Drivers who harm “vulnerable users” of a public way while texting on, talking on, or using their cellphones in Connecticut will face a fine of up to $1,000 after Governor Dannel Malloy signed a new distracted driving bill into law last week.

Known as the Act Concerning the Penalty for Causing Harm to a Vulnerable User of A Public Way, the new law creates a separate violation for distracted drivers who kill or seriously injure a vulnerable user of a public way. As defined by the law, vulnerable users include pedestrians, highway workers, bicyclists, people riding or driving animals, skaters, skateboarders, roller bladers, people riding or driving tractors, people using wheelchairs or motorized chairs, and blind people and their service animals. In addition to distracted drivers, the law applies to any motorist who fails to exercise reasonable care while driving on any public highway, road, street, avenue, alley, driveway, parkway, or other public way in Connecticut.

The distracted driving bill was created after 44-year-old Kenneth Dorsey was killed by newly licensed teen driver Brianna McEwan while jogging on a Connecticut road in 2012. The 16-year-old driver was using her smartphone when she struck Dorsey. Though charged with negligent homicide, McEwan accepted a plea deal through which she received a suspended sentence in place of jail time.

Despite specifically protecting the safety of road users not inside a motor vehicle, the penalty for the new offense doesn’t feel like enough to some whose lives have been affected by distracted driving. In response to the new law, Marlene Dorsey, Kenneth’s mother, told WCBS 880 that she doesn’t think a $1,000 fine will stop people from using their cellphone while driving.

Car Breathalyzer Help applauds Connecticut lawmakers for creating a law designed to protect vulnerable public way users. But considering how widespread and dangerous distracted driving has become, we can understand why Dorsey doesn’t feel the consequence for the offense is enough. Like drunk driving, distracted driving is the cause of thousands of preventable deaths. “We’re just trying to get other people aware of the fact that you can lose a child, a mother, a father, someone,” Marlene told WCBS 880. “It’s becoming a nationwide problem, and there’s no reason for it.”