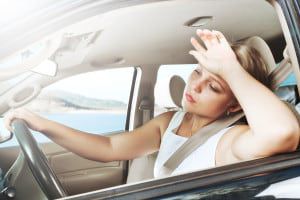 A deadly New Jersey crash that killed comedian James “Jimmy Mack” McNair and left comedian Tracy Morgan in critical condition on June 7 is raising awareness of the dangers of drowsy driving, which causes 100,000 traffic crashes and 1,550 related fatalities each year, as estimated by the National Highway Traffic Safety Administration (NHTSA). The driver of the tractor-trailer that hit the vehicle Morgan and McNair were in hadn’t slept in 24 hours. Unfortunately, long hours of driving with no sleep is common among truck drivers.

According to Dr. Timothy Morgenthaler, president of the American Academy of Sleep Medicine (AASM), drowsy driving is just as dangerous as distracted driving and even drunk driving. In fact, a study from Australia revealed that being awake for 24 hours straight produces the same impairing effects as a blood alcohol level of .10, which is over the legal limit. Similar to alcohol, drowsiness can affect your judgment, alertness, depth perception, and response time. Combine that with the heavy load tractor-trailers carry and the risk of both a crash and death or injury from that crash increases.

But truck drivers aren’t the only road users driving while drowsy. According to a recent Centers for Disease Control and Prevention (CDC) study that surveyed 147,076 respondents about drowsy driving, 4.2% reported having fallen asleep while driving at least once in the previous 30 days. The latest Sleep in America poll from the National Sleep Foundation (NSF) shows that 60% of Americans have driven while drowsy while 37% admit actually having fallen asleep behind the wheel in the past year.

Like drunk driving- and distracted driving-related crashes, drowsy driving-related accidents are completely preventable. You can prevent drowsy driving by getting at least eight hours of sleep every night, especially the night before a big driving trip. If you feel drowsy while you’re behind the wheel, have a licensed passenger who is alert take over or pull off of the road to rest or even take a nap.