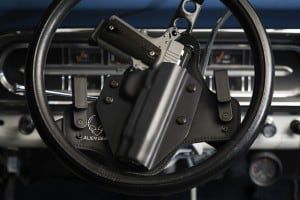 The U.S. Constitution allows us the right to bear arms, a highly debated topic as we enter into the 2016 Presidential elections. For some, that right gets a little challenging, especially when they have a felony conviction. Specifically, the Constitution prevents a felony offender from owning a gun, and it does not discriminate between violent and non-violent felonies. Since every state has a felony conviction for non-violent DUIs based on the number of convictions, habitual DUI offenders run the risk of losing their guns along with other liberties when they’re drinking and driving. In Indiana, however, even one DUI is a consideration for removing that Constitutional right from the offender, a problem that could soon be rectified by lawmakers in the state.

One DUI is often thought of as a lapse in judgment, especially where there are no aggravating factors. Indiana’s DUI laws go from “lapse in judgment” consequences like fines and court costs with the first DUI (OWI) to a felony conviction for a second or subsequent conviction. At the felony level, a drunk driving offender not only has high fines, jail time, a car breathalyzer or ignition interlock requirement, but they have the restrictions of a felony. That means they cannot carry or own a gun or firearm, according to federal law. Any changes to Indiana’s law would not affect that policy.

However, the proposed changes would change the information submitted for a gun license, specifically leaving out a first-offense DUI or lesser alcohol-related conviction. Right now, that information is used to determine if a person should be able to own or carry a gun, and while there is a connection between alcohol and violence, the connection between drunk driving offenses and gun violence remains to be researched.

The laws in Indiana are strict on repeat DUI offenders, encouraging everyone to think twice about drinking and driving. Perhaps the threat of losing one’s right to bear arms in Indiana can serve to remind everyone about  the dangers of drinking and driving, as well. There’s just too much to lose, from any angle, when you mistake your “one for the road” for anything other than a fast track to a DUI.