DUI Dilemma: Would You… Drink at a Funeral? 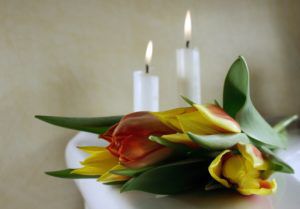 Everyone processes emotional events in their own way, and when it comes to the death of a loved one, there is a spectrum of expected reactions to that person’s passing. Having a drink to cope with emotions, or in celebration of a person’s life is pretty common, but an Indiana funeral home has us wondering about a new DUI dilemma. If offered, would you drink at a funeral?

Alcohol is being paired with painting or yoga classes, at libraries, and even gun ranges or go-kart tracks, increasing the opportunities for socialization – and a DUI.

Having one drink is not going to be enough to cross the national DUI blood alcohol concentration (BAC) limit of .08 percent. However, any amount of alcohol that is detected during a DUI can be used in a court trial, especially when the driver was caught driving erratically or dangerously. Emotions run high during and after a funeral, so even if you are not drinking while at the event, be aware that your emotional state may be haywire for quite some time. The last thing you need is the grief of losing a loved one and the regret of a DUI in the days that follow.

The obvious DUI dilemma with drinking at a funeral is that when people are experiencing difficult emotions, they may drink more alcohol than normal. Drinking alcohol and then driving is the number one cause of a DUI, ignition interlock requirement, or much worse consequences. By offering alcohol during a funeral service, there is an inherent risk to those who are grieving, and to anyone else on the road. However, if common sense is practiced and anyone drinking at a funeral has a safe ride home, raising glasses in a toast during a final send-off can be a touching tribute to a person who may have always seen their own cup as half full.

Homemade Cold and Flu Remedies: Whisky is Risky
Next Post: How to Qualify for the New Mexico DWI Diversion Program