DUI: Dogs under the Influence?

You are here: Home / General Information / DUI: Dogs under the Influence?
December 15, 2016 by Editorial Staff 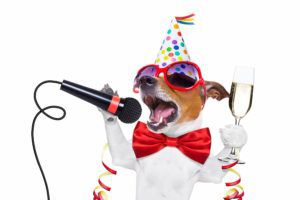 Including your pets fully in your holiday celebrations has its limits. In fact, we can all take a big lesson from the dangers of DUI (dogs under the influence) in our own habits and cut back on drinking. If for no other reason, to keep our pets safe from the dangers of alcohol.

There are two common causes of DUI, both of which are equally preventable:

The problem with both of those scenarios is that alcohol is poisonous to our pets. Alcohol is also poisonous to humans at high levels, so imagine what a much smaller taste could do to your puppy’s system. Another real danger for your dog (or cat) is an injury as a result of your human DUI. Driving under the influence is a big danger when we drink too much alcohol, with consequences like court costs, fines and a car breathalyzer (ignition interlock) requirement. But harming our pet may be one of the worst consequences we can face.

Any way you look at it, pets and alcohol don’t mix this holiday season, or anytime throughout the year. Keep your pets close, and the alcohol far away, and your worries over your pet health will at least be without the concerns of a doggie (or kitty) DUI!