What is a Field Sobriety Test?

You are here: Home / Resources / What is a Field Sobriety Test?
September 10, 2014 by Editorial Staff 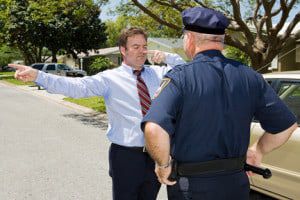 When a police officer pulls over a driver on suspicion of drunk driving, he or she cannot arrest the driver without probably cause. That’s where the Standardized Field Sobriety Test (SFST) comes in. Developed in the late 70s and early 80s as a result of research conducted by the National Highway Traffic Safety Administration (NHTSA), the SFST gives law enforcement a reliable, scientifically-validated, court-admissible way to determine if a driver is impaired.

Law enforcement officials are trained to become skilled at detecting drunk drivers by conducting three specific tests proven to fairly determine whether or not a driver has been drinking.

HGN Eye Test
Horizontal gaze nystagmus is an involuntary twitching of the eye that occurs when you use your peripheral vision to look to the side while keeping your head facing forward. Normally, this happens at a 45-degree angle. If the twitch occurs at an angle less than 45 degrees, it’s a sign of a high blood alcohol content (BAC).

Walk and Turn Test
The walk and turn test, as well as the third test, requires you to listen and follow instructions while performing a simple movement. When sober, such a task is performed perfectly without much though. However, intoxicated people have a difficult time performing tasks that require both mental and physical exercise.

In the walk and turn test, a police officer asks the driver to walk heel-to-toe along a straight line for nine steps, then turn on one foot before returning in the same way. NHTSA studies show that about 68% of those who exhibit two or more the following signs of intoxication will have a BAC of at least 0.10:

One Leg Stand Test
For the one leg stand test, a police officer asks a driver to stand with one foot raised about six inches off the ground while counting aloud by thousands. Officers will time the driver for about 30 seconds. According to NHTSA research, about 65% of people who exhibit two or more of the following signs of impairment will have a BAC of at least 0.10:

When combined, all three tests are 90% accurate in determining that a driver is impaired.

Who is Notified of a Failed Ignition Interlock Test?
Next Post: Michigan Bar Reports on Accuracy of Field Sobriety Tests