Does that Moped Driver Have a DUI?

You are here: Home / Resources / Does that Moped Driver Have a DUI?
February 27, 2015 by Editorial Staff 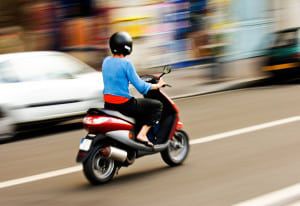 Mopeds can be seen as safe and economical vehicles for anyone to get across short distances. They’re fun for some, almost like toys, and are often considered recreational rather than functional. But, mopeds are still vehicles, and when an adult is seen “tooling around” town on a moped, there might be some lingering thoughts, like that person may be in trouble for a DUI or drunk driving charge.

A moped driver is probably not a DUI offender, however. Since any motorized vehicle is still considered a vehicle, it would be a violation for a DUI offender to be operating a moped without a license. Plus, if the DUI or drunk driving conviction occurred in a state that requires a car breathalyzer or ignition interlock device in order to restore a suspended driver’s license, operating a moped would be a violation of that requirement.

After a DUI conviction, the court takes into consideration the best way for an offender to get around, while keeping that person from drinking and driving again. More often than not, the conviction will end with an ignition interlock requirement for the safety of the offender, as well as others on the road. Violating the conditions of a DUI conviction will just add more consequences, and there aren’t many people willing to risk that for the chance to drive a moped.

No matter how safe and economical, or toy-like a moped may seem, if the driver isn’t held responsible for drinking and driving, and restricted to being sober while operating a vehicle, then there is the very real chance they could put lives in danger again… even on a moped. In some states, a vehicle doesn’t even have to have a motor to be considered “off limits” when drinking, like bicycles and scooters. That means that no matter what the vehicle being operated is, there is no safe vehicle when a person has been drinking. Instead of facing a future without even a chance at operating any vehicle, remain sober when driving, and leave the “toy” vehicles for an actual day of fun.

I Have a Hybrid Car… and a Car Breathalyzer Requirement!
Next Post: Underage Drinking in Florida is a Spring Break Buzzkill