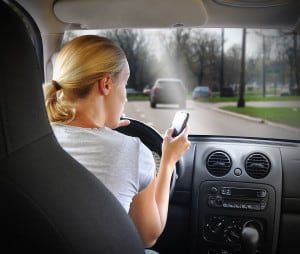 A Legislature-passed distracted driving bill that bans handheld cellphone use while driving in New Hampshire is expected to be signed into law by Governor Maggie Hassan once it reaches her desk, according to Hassan spokesman William Hinkle. In fact, officials in the state are already considering ways to educate the public on the potentially new law.

Currently, New Hampshire law only prohibits drivers from typing and sending texts while driving. The new distracted driving bill expands current law by banning handheld use of a cellphone, GPS, iPad, or other electronic device while driving, at a stop sign, or stopped in traffic. The bill will still allow drivers to use hands-free devices, such as Bluetooth and voice command, while driving, but drivers will have to pull off of the road and stop use a handheld device. Drivers under the age of 18, however, will be banned from both handheld and hands-free use of cellphones and electronic devices.

Drivers who violate the law will face a $100 fine for a first offense, a $250 fine for a second offense, and a $500 fine for any subsequent offense that occur within a 24-month period.

While the bill wouldn’t take effect until July 1, 2015, the state would start educating the public on the law right away so that drivers are aware of the law and understand it before it goes into effect. Assistant Safety Commissioner Earl Sweeney reports that the state is already considering a variety of methods to get the message out, including traffic signs, radio talk shows, public service announcements on radio and television, and brochures. The state is even considering adding a section on the law to the driver’s manual used by first-time drivers.

To ensure that nonresidents are aware of cellphone ban when driving through New Hampshire, brochures on the law will be placed at liquor stores, rest areas, and other sites frequently visited by nonresidents. The law may also be included with travel guides.

And, of course, once the law goes into effect, there will a brief grace period in which police officers will be lenient with drivers caught violating the law until law enforcement officials feel that drivers are aware of the law.