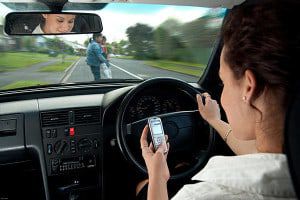 Before the law went into effect on July 1, only teen drivers with a learner’s permit or provisional license were banned from texting while driving. Under New Mexico’s new distracted driving law, all drivers are prohibited from sending or reading text messages and emails while driving, stopped at a light, or stuck in traffic. Searching the internet, browsing social media sites, and other activities that require manual operation on a handheld device are also prohibited while driving. Operating a GPS or other navigation system is still allowed.

Drivers caught texting and driving will face a $25 fine after a first offense and a $50 fine after a second or subsequent offense. While the consequences leave something to be desired, the law is an important first step toward reducing distracted driving on New Mexico’s roads, which carry an increasing number of distracted drivers. Farmington police Sgt. Dave Monfils told The Daily Times that distracted driving accounts for the New Mexico city’s increase in crashes in which vehicles are rear-ended. He also points out that many “drunk drivers” reported to the police turn out to be distracted drivers on their phones.

Monfils hopes that the new law will deter drivers from texting and driving and save lives. To make the law easier to enforce, Monfils plans to use unmarked police cars. “When someone sees a police officer, they put their phone away,” he explained to The Daily Times. “We’re going to get them and let them know [that] you may never know when you are next to a police officer.”

Previous Post: « What to Do When a Friend is Texting While Driving
Next Post: The Cost of Providing Alcohol to Minors »