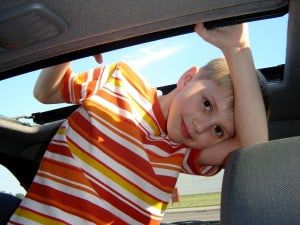 We spend a lot of time making sure our kids are safe from harm. Since car accidents are a leading cause of death for children, we know that we need to make sure they’re buckled in and that we always follow the “rules of the road” when driving. That also means that it is even more important that we’re not driving under the influence when kids are in the car… but, not everyone gets that message.

In Oklahoma, 404 children were involved in DUI crashes in 2014, a sobering statistic for everyone on the road. When you consider that an adult made a decision to drive under the influence and that those children had no choice but to ride along, tough consequences are expected, like child endangerment charges. In Oklahoma, however, you could also be facing a DUI felony, and everything that comes along with it.

A DUI felony is expected after a second or subsequent drunk driving conviction in Oklahoma, making it a tough ride when compared to most states’ “three strike” felony laws. But, even the first time you drink and drive, if you have a child passenger in the vehicle, you’re heading straight for that DUI felony charge, plus potential child endangerment charges and the involvement of child protective services. The court fines, substance abuse programs, probation or car breathalyzer requirement are just the tip of the felony DUI iceberg you’ll face. None of that is worth the risk of drinking and driving, but, ultimately, it isn’t worth it because you’re putting your kid’s life on the line.

Drinking and driving ultimately comes down to a decision to risk your life, and the lives of others, including your own child. A felony DUI in Oklahoma might not be enough to stop you from making that choice, but the well-being of a child definitely should be.

The Problem with DUI Dogs in Florida
Next Post: Do I Need a Car Breathalyzer or Ignition Interlock?