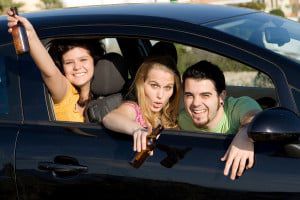 The Commonwealth of Virginia has a few things to explain, at least if you ask about its open container laws. There’s some confusion about who can and cannot drink alcohol in a vehicle while it is in motion, leading some to believe they can drink while driving in Virginia. Fortunately, this is untrue – it is completely illegal for the driver of a vehicle to drink alcohol while operating a vehicle, and that same driver cannot have open containers of alcohol within reach while driving… unless, there’s a passenger who is drinking.

Most states completely disallow open containers of alcohol in a vehicle that is being driven for obvious reasons. A driver could just say the drink isn’t theirs, while all the time they’ve been sipping on their friend’s beer while heading down the road. Too many sips, and that driver could fit the criteria for driving under the influence of alcohol, leading to a drunk driving conviction, car breathalyzer or ignition interlock requirement and other consequences.

However, Virginia is one of those states that doesn’t prohibit passengers from drinking alcohol while riding in a car. Virginia also pays the price for that in a reduction in federal funds, and in the risks involved with having drivers with an open container of alcohol in their car. Presumably, if a passenger is seen drinking, that is “probable cause” to pull the car over and perform sobriety testing on the driver… and the passenger could be cited for drinking in public, public intoxication or similar laws.

Virginia does have “open container” laws, and even though they aren’t as black and white as other states, it is just smart to leave the drinks in your trunk and impose a sobriety rule for everyone in your car. Risking the appearance of drinking and driving can lead to some frustrating moments, even if you’re sober, and your passengers can always find a different ride if they can’t leave the bottle alone while you’re in the driver’s seat.

When Pilots Fly Drunk: Flying Under the Influence
Next Post: Florida, Ignition Interlocks, and Your Other Home State