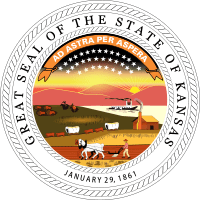 DUI Laws
Anyone who operates a vehicle with a blood alcohol concentration (BAC) of 0.08 or higher in Kansas is charged with DUI. Consequences include a fine, jail time, and driver’s license suspension:

Under the state’s DUI Child Endangerment Law, convicted drunk drivers who committed the offense while a child under the age of 14 was in the car will be sentenced to an additional month of jail time to be served consecutively to their minimum jail time sentence for DUI.

Ignition Interlock Laws
Kansas is one of only 18 states that requires all convicted drunk drivers, even first-time offenders, to install an ignition interlock device in their vehicles. The amount of time offenders must keep the device installed is dependent on prior convictions and their BAC at the time of arrest:

The period of interlock installation increases by one year for second-, third-, and fourth-time offenders with a BAC of 0.15.