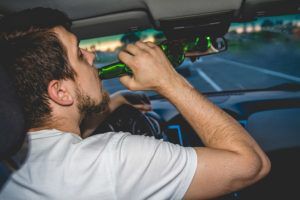 If the Super Bowl was any indication of the dangers of drinking at sporting events, we should all have a degree in DUI prevention now. This year, things have been so clearly out of hand after the game that there was a bag of chips manufactured to test snackers’ blood alcohol concentration (BAC). If that breathalyzer bag of chips wasn’t bad enough, a recent headline about drunk drivers at a golf tournament just proves that there’s no safe BAC OR safe sport when it comes to DUI.

Protip: never trust your snacks to give you realistic DUI advice.

At the Phoenix Open in Scottsdale, Arizona, over 4,000 golf fans failed a breathalyzer test (tested at .08 percent BAC). To make matters worse, there were only 10,000 people in attendance. Fortunately, only 222 of those who failed the breathalyzer test admitted they had planned to drive home prior to taking the test. Just 222 people who would have been on the roads, above the legal limit, putting lives in danger.

In Arizona, a DUI is a serious offense, even a first-time offense. A person who is caught driving with a BAC of .08 percent or higher will have a license suspension, court costs and fines and other consequences. Once those are all satisfied, they will also have an ignition interlock requirement. Most of those people probably thought they were okay to drive, too, only to discover they were legally not okay, putting lives in danger as a result.

Alcohol and sports is as American as baseball and apple pie, or hard cider, as it may be. Considering all of the time and effort that is put into planning a fun, sporty night with friends, having a plan for a safe ride home should be part of the night. Then everyone can enjoy the game and the security of a road that has no worry about anyone failing a breathalyzer or thinking they’re okay to drive after a big game lets out.