In and Around the Car Safety: Seat Belts

You are here: Home / Resources / In and Around the Car Safety: Seat Belts
January 31, 2014 by Editorial Staff 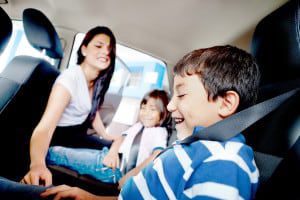 You know that motor vehicle crashes are the leading cause of death for children ages 1 to 19, but traffic crashes aren’t the only cause of car-related injuries and fatalities among children. Over the next year, we’ll talk about safety in and around the car to raise awareness of other car dangers and reduce preventable car-related injuries and fatalities.

Seat belts can reduce crash-related fatalities and serious injuries by about 50%, according to the Centers for Disease Control and Prevention (CDC). Safekids.org reports that in 2011 alone, 263 children involved in car crashes were saved because of seat belt use. However, a seat belt can also be dangerous for children when not used properly or when worn too soon.

Seat belt entanglement is a common seat belt danger that may occur when children pull the seat belt all the way out and wrap the belt around their head, neck, or waist. To accommodate child car seat installation, most seat belts have a locking mechanism that’s activated when the seat belt is pulled all the way out from the retractor. If this occurs while a child is restrained and the child becomes entangled, the locking mechanism can prevent the child from freeing him or herself.

Children aren’t usually big enough to switch from a booster seat to just a seat belt until they are between the ages of 8 and 12. According to Safekids.org, children ages 2 to 5 who use seat belts before they’re big enough are four times more likely to suffer a serious head injury in a crash than children in child safety seats or booster seats. Head over to Safecar.gov’s Parent Central to find out how to tell when your child is big enough to properly fit a seat belt and how to properly restrain your child with a seat belt.

Remember: Wearing a seat belt is the most effective thing you and your passengers can do to protect yourselves in the event of a car crash. Always make sure you and your children are properly buckled up every time you drive.