You are here: Home / Resources / Buckle Up and Drive Safe Thanksgiving Weekend
November 26, 2013 by Editorial Staff 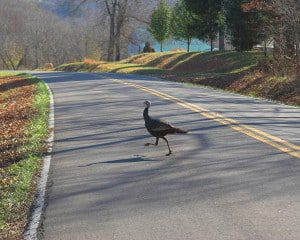 Thanksgiving day and weekend is one of the busiest travel times of the year, and with all the excitement combined with busy roads (not to mention the notorious post-Thanksgiving meal fatigue), travelers can easily lose focus on safely getting to their destinations

According to the National Highway Traffic Safety Administration (NHTSA), 1 in 5 Americans fail to regularly wear a seat belt while driving or riding in a car. Thanksgiving is no exception. During the 2011 Thanksgiving holiday period (the Wednesday before thanksgiving through the Monday after), 249 people were killed in traffic crashes. 50% of those people were not wearing seat belts.

Driving at night is especially dangerous. During the same Thanksgiving holiday period, 57% of passengers killed in nighttime crashes were not wearing a seat belt, compared to 40% during the day, according to the NHTSA.

However, buckling your seat belt can reduce the risk of fatal injury to a front seat passenger by 45%. You’ll also lose the risk of getting a ticket for not buckling up. As part of the “Click It or Ticket” campaign, law enforcement across the nation will be cracking down on drivers and passengers who fail to buckle up during the Thanksgiving holiday period.

Make sure that you and your family stay safe while traveling this Thanksgiving season by following these holiday driving safety tips: