You are here: Home / Events / Buckle Up for National Seat Belt Enforcement Mobilization
May 23, 2013 by Editorial Staff 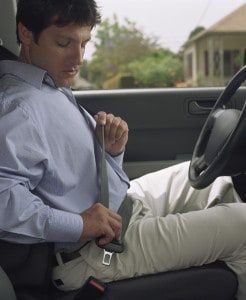 The most effective safety feature ever invented, according to the National Highway Traffic Safety Administration (NHTSA), the seat belt has helped save thousands of lives in fatal car crashes. In 2011 alone, seat belts saved 11,949 lives. Despite their effectiveness and easy-to-use design, one in five Americans still regularly forgo their seat belts. Of the 121,507 passenger vehicle occupants killed in car crashes from 2007 to 2011, 53 percent were unrestrained.

From May 20 to June 2, law enforcement officers across the nation will crack down on drivers and passengers who fail to buckle up in a seat belt-ticketing blitz known as the National Seat Belt Enforcement Mobilization. Part of the Click It or Ticket campaign, the seat belt enforcement program aims to reduce seat belt fatalities and raise awareness about the importance of wearing your seat belt by cracking down on non-users. The program also raises money for the state through increased traffic citations, including seat belt, speeding, and DUI fines.

Day or night, make sure you buckle up every time you drive or ride in a car over the next two weeks, as police officers will ticket any vehicle occupant not wearing a seat belt without warning. While the program only lasts from May 20 to June 2, seat belt use is strongly enforced all year-round, and in 33 states, primary seat belt laws allow police officers to pull over and ticket front seat occupants solely for not wearing a seat belt. So no matter what time of day or year, always buckle up to avoid a fine and potentially save your life.