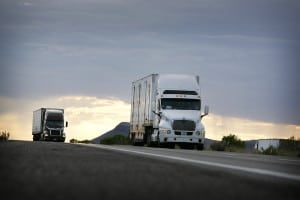 Every day, we share our roads and highways with thousands of commercial vehicles carrying everything from hazardous gas tanks to food for your local grocery stores to young school children. Despite state drunk driving laws and Federal Motor Carrier Safety Administration (FMCSA) regulations, some of the drivers operating these vehicles are driving under the influence of alcohol.

Drivers who operate commercial vehicles, which transport goods and passengers, are held to higher standards than non-commercial drivers, particularly when it comes to driving while impaired. Under FMCSA regulations, the blood alcohol concentration limit for commercial drivers 0.04 – that’s half of the non-commercial limit of 0.08. Employers of these drivers are also required to administer alcohol tests, both randomly and under specific conditions, such as post-accident.

Despite these rules, many commercial drivers continue to drive while impaired and the solution for many companies is merely a reactive response after a DUI-related crash occurs. The typical solution is to terminate an employee if he or she is arrested and/or convicted of driving while impaired, which not only continues to put the public in danger but leaves employers with a pile of losses and expenses, including the cost of repairing or losing a vehicle, loss of employee productivity, health insurance costs, legal and administrative costs, and the invaluable cost of the company’s damaged reputation.

An alternative and cost-effective solution is for companies to install ignition interlock devices for commercial vehicles. Commonly issued to DUI/DWI offenders as a sentencing condition, an ignition interlock is a device that measures a driver’s breath alcohol level (BAL) and prevents a vehicle from operating if the driver’s BAL is higher than a preset limit. The device also records failed tests and other violations.

Equipping commercial vehicles could be beneficial for companies, their drivers, and the public. Companies would save the money they would have spent on the effects of alcohol-related accidents while creating a reputation as a company that’s proactive about employee, customer, and public safety. Employees could potentially save their own lives and others’ as well as their jobs. Most importantly, commercial vehicle drivers would pose a lesser threat to the public, and many potential deaths and injuries would be prevented.

Previous Post: « Drunk Driving in the Latino Community
Next Post: You’re Never Too Experienced to Drink and Drive »