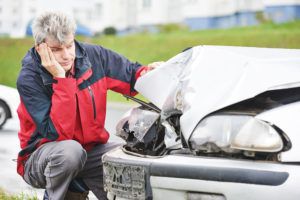 We try to keep our Shocking DUI news as local as possible, or at least within the U.S. borders. But there are times when we stumble across the fantastic stories that occur outside of our backyards. Drunk driving is not just a problem in Florida, Iowa, or California. It can happen anywhere, from the person who drives home after drinking, only to end up in the parking lot of a police station, to the international sensation of Bumper Man… the guy who literally put his bumper in his boot.

The shocking DUI is not so much the man’s refusal to litter, but that people just kept filming the drunk man, rather than, well, alerting authorities.

Ok, so yes, he was drunk. But he was not drunk enough to leave his bumper on the road like a slob. He did, however, drive ON a crosswalk as if he was a pedestrian. That could have ended up badly for anyone in his path. Even though the person filming the incident was not necessarily calling the police, the suspect was finally apprehended by police after he had done so much damage to his vehicle that it would no longer drive.

There are intoxicated drivers all over the planet, and despite most countries have blood alcohol concentration (BAC) limits that are similar to those in the U.S., drunk driving still remains a pervasive, yet wholly preventable problem. Solutions like restricted driver’s licenses, ignition interlock devices, and alcohol education programs provide a path to getting back on the road, legally.

No matter where you live, or what the conditions are when you think you see a drunk driver, remember that a person who keeps driving even after placing a piece of their vehicle IN their vehicle has been given way too many chances. Take a stand against drunk driving, and help keep the shocking DUI stories and the devastating DUI realities to a minimum.

Did You Want a Tap Dance with Your Florida DUI?
Next Post: 3 Ways to DUI-Proof Your Holiday Season