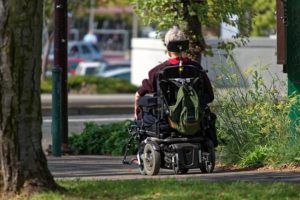 A wheelchair is a tool to help people get around, whether there are permanent or temporary mobility issues. We don’t often think about DUI laws when a person isn’t behind the wheel of a car. However, a few years ago, we were greeted with the story of an Ohio man who got a DUI while in a wheelchair.

Ohio law states that a person cannot operate a vehicle while under the influence of alcohol or drugs:

4511.19 Operating vehicle under the influence of alcohol or drugs – OVI.

(A)(1) No person shall operate any vehicle, streetcar, or trackless trolley within this state, if, at the time of the operation, any of the following apply:

(a) The person is under the influence of alcohol, a drug of abuse, or a combination of them.

A vehicle is anything used to transport people or items, which includes things like bicycles, tractors and, obviously, wheelchairs.

Ohio DUI (OVI) law also has strict consequences for drunk driving, including an ignition interlock requirement in many cases. While it is impossible to install an interlock on a wheelchair, a judge could order the device to be installed on your regular vehicle. DUI laws in any state don’t have different provisions based upon the vehicle used during the drunk driving incident. If a law requires an interlock for a DUI, then that is what will have to happen.

Considering all that you could lose through a DUI, there’s really no reason to be driving a car, wheelchair or skateboarding if you’ve been drinking. Your best plan to stay out of trouble is to have a safe ride if you’ll be drinking. Then you can skip the DUI drama and drift off sweetly into dreamland.