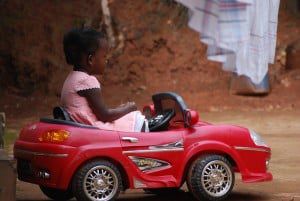 Drinking responsibly means different things to different people. Some people plan ahead by having the number of local taxi companies handy or their Uber app ready to roll. Others secure a designated driver before heading to a bar or party for the night. Then, there are those who are less responsible about their drinking, and take their kids along for the ride… or, better stated, they have their kid drive them home, even when that kid can barely reach the pedals.

A couple in Wisconsin was recently arrested for having their daughter, age nine, drive them home because they knew they were too drunk to drive. While this is not the most common designated driver strategy, it isn’t unusual, either. The good news is that nobody was harmed during the incident, including an infant in the vehicle. The bad news is that the parents of the girl were not arrested for drunk driving.

Wisconsin is already known for having a more liberal view on drunk driving than most of the U.S., which is why the parents were not charged with OWI. Since they were not driving, or even supervising the child driver, they somehow evaded drunk driving charges, unlike this couple in Georgia who were charged with DUI under similar circumstances. However, the Wisconsin couple was charged with reckless driving and child neglect. None of this is incredibly shocking, given that Wisconsin often treats a first-offense OWI as a traffic violation. Hopefully this year the state will implement some changes to those laws, even if nothing can be done about minors appointed as designated drivers.

When considering the more common consequences for drunk driving, including a car breathalyzer or an ignition interlock requirement, a designated driver always seems like one of the best plans to avoid the risks and frustration of a drunk driving conviction. Just remember that there are plenty of adults who would be willing to get you and your whole family home safely.

Will Virginia Expunge Your DUI Conviction?
Next Post: Could a DUI Cost a Million Dollars?